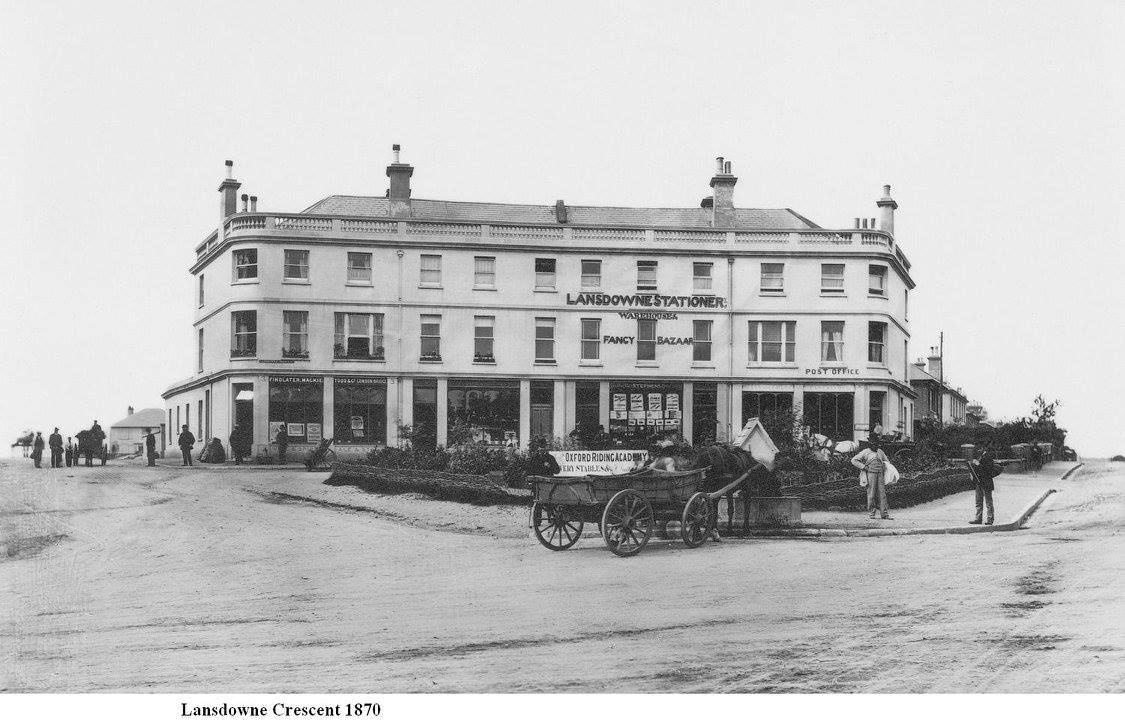 This is a picture of our office in 1870. Our office is the corner on the left hand side.

In 1870, just behind the horse and cart is ‘Oxford Riding Academy’ – Obviously the car was not invented or around in 1870, hard to believe today. The horse is just taking a drink in the water well. The post office is on the right hand side, they haven’t moved very far and are still on this parade, next to us. Looks like a stationary in the middle. I cant quite see what our office used to be.

You will note though, it doesn’t look like that today. Exactly half the building, on the right hand side had to be rebuilt after a bomb flew up that side of the building during the second world war in Bournemouth’s bloodiest air raid of 23 May 1943.

Bournemouth’s air raid sirens had sounded 847 times since the outbreak of war but on this day, German targeted Bournemouth. What followed was devastation with approximately 25 high-explosive bombs falling on the town.

3359 buildings were damaged, including our Parade and 37 had to be demolished, 22 destroyed including two of the town’s landmark hotels, the Metropole at the Lansdowne and the Central at the bottom of Richmond Hill.

This beautiful building in now the Royal London House, currently with KFC at the Lansdowne roundabout.

The Germans knew that if they destroyed aircraft those planes could be replaced, but if they killed aircrew it would take longer to train replacements,’ explains Mrs Beleznay, whose book Incident 48: Raid on a South Coast Town tells the full story of that terrible day.

By far the greatest devastation at that end of town was wrought on the Metropole Hotel. From Christchurch Road it appeared almost untouched, but the imposing Victorian façade on Holdenhurst Road had been almost completely removed by a single bomb that entered the building about two floors up and exploded on contact with the steel and concrete staircase.

Among many acts of bravery that day, 76-year-old David Gear, the boiler-room stoker who had worked at the Metropole for 25 years before his retirement and returned for the duration of the war, escaped from the building only to go back in to extinguish the boilers and turn off the gas to prevent fire breaking out. He was later awarded a Certificate for gallantry by the Kings Order from Winston Churchill.

To view Our / Building, we are at 3 Lansdowne Crescent, Bournemouth, Dorset, BH1 1RX